On 13 November 1964, through ISTA, INSTEL, Soedarpo started PT Perusahaan Pelayaran Samudera "Samudera Indonesia", which he held as President Director until the year 2000 and as President Commissioner until his passing in 22 October 2007.

Throughout his career, Soedarpo was active in various professional and social organizations, among others as the General Chairman of INSA (Indonesian National Shipowners' Association). Soedarpo was also known as one of the District Governors Rotary International in Indonesia, and founder as well as the Chairman of the Rotary Indonesian Foundation.

In 1985, Soedarpo received the "Orde Van Oranje-Nassau" award from the Kingdom of Holland for his services for the community. In 1995, he received "Bintang Mahaputra Pratama" from the President of Indonesia. In 28 September 2000, Soedarpo was honored to be in the "Asia Maritime Hall of Fame" as an award for his career in building Samudera Indonesia as one of the well respected players in the Asian maritime industry.

Providing transportation services, to meet the demand of distribution activities all over Indonesia.

Positively contributed to the economic growth in Indonesia, by providing efficient logistics solutions.

To ensure sustainable business growth, and deliver additional value to the shareholders.

To Uphold High Level of Integrity and Professionalism 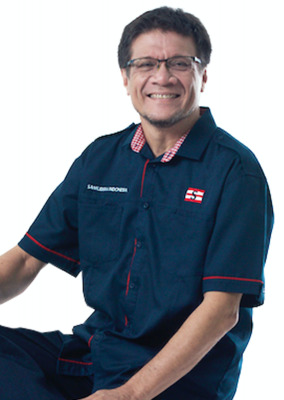 Indonesian citizen, born in Jakarta, 28 December 1955. He has effectively served as a member of the Board of Commissioners since 2011, with the last appointment based on the Deed of the Annual General Meeting of Shareholders Resolution Number 28 dated June 26, 2019, prepared by Vincent Sugeng Fajar S.H., M.Kn.

He graduated with an Engineering degree from the Faculty of Sanitary Engineering, Bandung Institute of Technology in 1983 and earned his MBA from IPMI – Monash University in 1999. Started his career in PT Sucofindo (Persero) since 1984 until 2008 lastly served as President Director. In addition to being Commissioner of the Company, since December 2019 he also serves as Director in PT Asuransi Bintang Tbk.

He actively participated in the various seminars, training, workshops, conferences, both national and international scope, with subjects as in Information Technology, Leadership, Management, Environmental, and many others. During his professional career, he had been assigned in Calgary, Canada for 1 year. 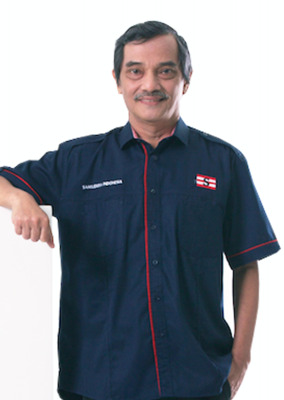 Indonesian citizen, born in Jakarta, 28 July 1953. He was a Commissioner in the Company for the period of 2009-2011, then was appointed as Director for the period of 2011 until 2019. He was re-appointed as a member of the Board of Commissioners in 2019 based on the Deed of the Annual General Meeting of Shareholders Resolution Number 28 dated June 26, 2019, prepared by Vincent Sugeng Fajar S.H., M.Kn.

He started his career in NVPD Soedarpo Corporation from 1975. Currently, in addition to being a Commissioner of the Company, he currently holds various positions in subsidiaries, among others are as Chairman in PT Tata Mitra Samudera.

Apart from Samudera Indonesia, he currently serves as President Director of PT Assindo Perniagaan International. In addition, he previously was the Independent Commissioner of PT Asuransi Bintang Tbk for the period of 2006- 2012, Chairman of PT Bhaita (Offshore Shipping Company), Director in PT Inti Samudera Prakarsa (Telecommunication Infrastructure Provider) for the period of 2002-2011 and in PT Branusa (Quantity Surveyors & Construction Cost Consultants) since 1994. 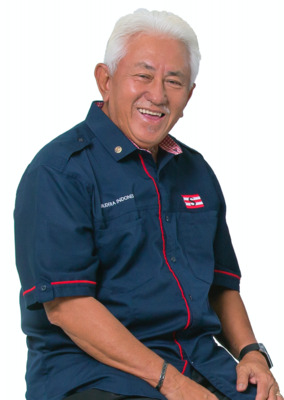 Indonesian citizen, born in 1946. He has effectively served as Commissioner since June 30, 2020, based on the Deed of the Annual General Meeting of Shareholders Resolution Number 40 prepared by Vincent Sugeng Fajar S.H., M.Kn.

He graduated from The Indonesian Marine Academy (1970). He joined the Company since 1971 as a deck officer and later served as Captain of various Company’s vessels.

He is affiliated to the Board of Commissioners, Board of Directors, and Controlling Shareholders. 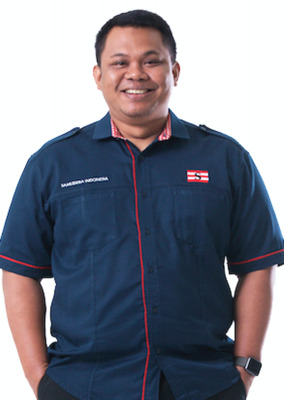 Indonesian citizen, born in 1976. He has effectively served since June 2, 2016, with his last appointment based on the Deed of the Annual General Meeting of Shareholders Resolution Number 28 dated June 26, 2019, prepared by Vincent Sugeng Fajar S.H., M.Kn.

He received Bachelor's degree in Engineering from the Industrial Engineering, University of Indonesia (1999).

In 2009 and 2010, he was appointed by the Ministry of Research and Technology of the Republic of Indonesia as a judge for the “101 Indonesian Innovation” program. In 2014, he was selected as one of the “50 Inspiring Figures” of the Engineering Faculty, University of Indonesia.

He is affiliated to the Board of Commissioners, Board of Directors, and Controlling Shareholders. 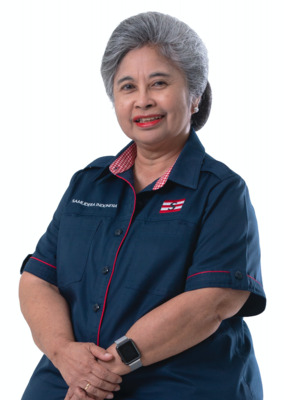 Indonesian citizen, born on April 9, 1948. She has been Chairman since June 26, 2019, based on the Deed of the Annual General Meeting of Shareholders Resolution Number 28 prepared by Vincent Sugeng Fajar S.H., M.Kn., after served as President Director of the Company, from 2007. She also currently serves as Chairman for PT Samudera Indonesia Tbk and PT Asuransi Bintang Tbk, also President Director for PT Ngrumat Bondo Utomo and PT NBU Indonesia Utama.

Educational Activities:
- Chairman of the Supervisory Board of Yayasan Pendidikan dan Pembinaan Manajemen (YPPM)
- Chairman of the Supervisory Board of Indonesian International Education Foundation (IIEF)
- Head of Consulting Board of AIESEC Indonesia
- Member of Consulting Board for Southeast Asia, INSEAD Management School
- Board Member of School of Management and Business Bandung Institute of Technology (SBM-ITB)
- Member of Supporting Board of Sanata Dharma University, Yogyakarta
- Founder & member of Wharton e-fellow, Wharton Business School, University of Pennsylvania, USA

Awards:
- “Woman Inspire Award 2002” in Information Technology category of Asia Pacific region by Women’s Business Connection (WBC) Singapore
- “Nature Guard Award” – for her leadership and dedication to the conservation program in Indonesia (in commemorating the 15th Anniversary of The Nature Conservancy/TNC, 2006)
- “Woman Entrepreneur of the Year 2009” – of the Asia Pacific Entrepreneurship Award 2009, from Enterprise Asia.
- “Ganesa Wirya Jasa Utama” from Bandung Institute of Technology for her achievement in developing entrepreneurship in Indonesia (2013)
- “The Order of the Crown” – from the Kingdom of Belgium for her roles in building cooperation between the two countries as Chairwoman of Indonesia – Belgium, Netherlands & Luxemburg Chamber of Commerce (2016)
- “Women of the Year” – for outstanding achievement in accountable leadership, from Asia Corporate Excellence & Sustainability Awards 2018 (ACES Awards 2018), held by MORS Group, Singapore
- Elected and declared as one of the five Indonesian Women Leader and Entrepreneur in Southeast Asia by UBS AG Wealth Management and is recorded in the book of We-The Words of Women Empowered 2019

She is affiliated to the Board of Commissioners, Board of Directors, and Controlling Shareholders. 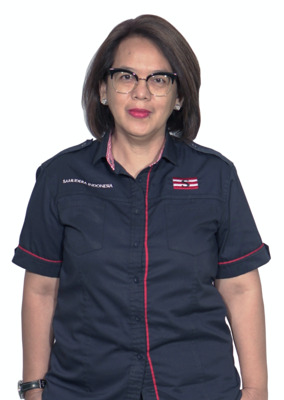 Indonesian citizen, born in 1963. She effectively serves as Human Capital Director since June 30, 2020, based on the Deed of the Annual General Meeting of Shareholders Resolution Number 40 prepared by Vincent Sugeng Fajar S.H., M.Kn.

She earned her Bachelor of Economics, majoring in Management from University of Indonesia (1988). She joined the Company bringing the vast experience of more than 20 years working in various global companies and 10 years in the Government and State-Owned Enterprises.

Prior to joining the Company, she was the HR Director of PT Jakarta International Container Terminal (2017 - 2019) and Director of Organizational and Talent Development, PT Pelabuhan Tanjung Priok (2015 - 2017). Currently, she also serves as a Director of PT Samudera Indonesia Tbk.

She commenced her career in Accenture Indonesia with the last position as Associate Partner (1988 - 2002), to then join IBM Global Services (IBM Indonesia) as Country Leader & Partner (2002 - 2006). She also once served as President Director at Korn/Ferry International Indonesia (2007–2009), before joining the Government as Deputy IV for Strategic Initiatives & International Relations in the President’s Delivery Unit (UKP4) from 2009 to 2014. 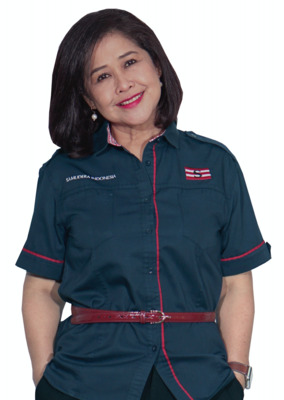 Indonesian citizen, born in 1962. She effectively serves as Compliance Director since June 26, 2019 based on the Deed of the Annual General Meeting of Shareholders Resolution Number 28 prepared by Vincent Sugeng Fajar S.H., M.Kn.

She earned her Bachelor of Law, majoring in Private Law from University of Indonesia (1986). Prior to joining the Company, she started her career in PT Bormindo Nusantara (1987-1988). Then joined Ali Budiardjo, Nugroho, Reksodiputro Counsellors of Law (1988-1990). Afterward, she joined as General Counsel for Indonesia (GCO) in American Express Bank Ltd, Jakarta (1990-1995).

She subsequently held several other important positions, such as Executive Director/Board of Directors of PT Danareksa (Persero) (1995-2005) and member of the Board of Commissioner Danareksa Investment Management (2003–2005) as Resource Director of PT Maxima Integra Investama (2005-2006). She was Director and Member of Executives Committee of PT Carrefour Indonesia (2007-2014), Director of Holcim (Malaysia) Sdn Bhd (2014- 2015), Director of Legal, Compliance & Corporate Affairs of PT Holcim Indonesia Tbk (2014-2019), and also as HR Director (temp) PT Holcim Indonesia Tbk (2017-2018), member of Board of Commissioners for Holcim Beton, Lafarge Indonesia and 6 other Subsidiary Companies of Holcim Indonesia (2014-2019).

In addition to her professional positions, she also enjoys sharing her knowledge as a keynote speaker at various events. Started in 2017 she has been invited as a guest lecturer at ITB School of Management Business Master's Program and has become a permanent Lecturer since May 2019. 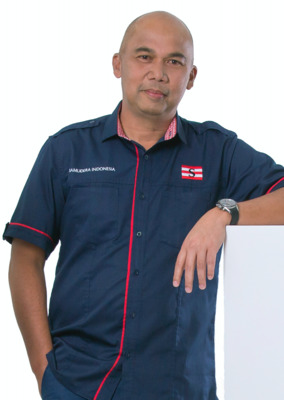 Indonesian citizen, born in 1963. Effectively served as Director of the Company since May 22, 2014. Afterward, as of June 26, 2019, he served as Finance Director based on the Deed of the Annual General Meeting of Shareholders Resolution Number 28 prepared by Vincent Sugeng Fajar S.H., M.Kn.

Currently, he also serves as a Director of PT Samudera Indonesia Tbk, the Executive Director of Finance in Samudera Shipping Line Ltd as well as Commissioner in a number of subsidiaries.

Prior to joining the Company, his career commenced in Prasetio Utomo & SGV Arthur Andersen (1987-1992), with his last position as Head of Mergers & Acquisitions Team. He then moved to and held various key positions in Coca-Cola Amatil Indonesia (1992-2005).

He subsequently held several other important positions, namely as CFO (2005- 2008) and President Director (2008-2010) of Hutchison Port, Member of the Executive Committee of the International Ports and Harbors (2010-2011), as well as CEO and President Director of Anglo-Eastern Plantations Group, which owns 17 palm-oil plantation companies and CPO factories all over Indonesia (2011-2014).

He earned his Bachelor of Economics majoring in Finance and Accounting from Padjadjaran University, Bandung (1987). 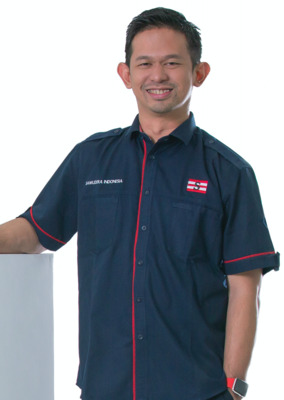 Indonesian citizen, born in 1980. Previously served as Managing Director since 2009, he was appointed as President Director as of June 30, 2020, based on the Deed of the Annual General Meeting of Shareholders Resolution Number 40 prepared by Vincent Sugeng Fajar S.H., M.Kn.

He is affiliated to the Board of Commissioners and Controlling Shareholders.